A Nobel day: the 18th of April Prof Yunus will return to Bologna and Forlì

On Wednesday, April 18th the Nobel Peace Prize Prof. Muhammad Yunus will give two public lectures in occasion of a Social Business and Microcredit event promoted by Grameen Italia Foundation in collaboration with the University of Bologna and the Bologna Business School.

The two lectures will focus on Social Business and on social oriented firms. 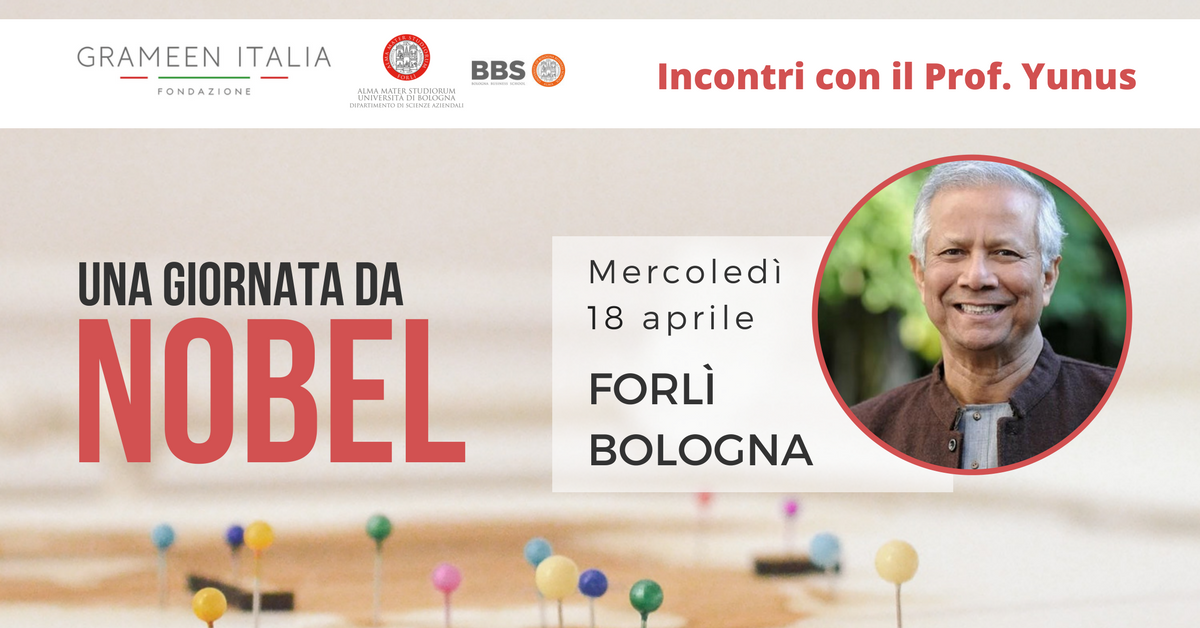 According to Yunus, it is time to admit that the capitalistic system is failing and that in the current situation, it brings inevitably strong inequalities, unemployment and environmental destruction. To save humanity and the planet, we need a new economic system grounded on a more realistic vision of the human nature which recognizes altruism and generosity as leading forces as fundamental and powerful as self-interest.

📌 BRIEFLY: THE APPOINTMENTS OF THE DAY

Inauguration of the Research Department Center “Yunus Social Business Center” of the Bologna University and public Lecture “A World of Three Zeros”.

Inauguration of the new Grameen Italia Foundation office for microcredit and self-entrepreneurship. It will follow: citizenship greetings.

Ceremony for the signing of the partnership agreement between Unicredit and Grameen Italia Foundation.

The agenda begins at 10:00am with the launch of the first Yunus Social Business Centre of the University of Bologna in Forlì; since many years the city represents a focal point of international relevance as part of social economics also thanks to the stable and solid presence of the university.

At the ceremony will take part the Rector, Francesco Ubertini, the Director of Corporate Science Department, Maurizio Sobrero and the representative of the most important local entities.

The Yunus Social Business Centre will be devoted to the promotion and the diffusion of Social Business research both in the academic and in the professional area, involving young students and researchers. The activities in the Centre will concern researches on economic and corporate models with a social vocation, the publication and dissemination of the results, the development of PhD researches and the academic partnership with the Yunus Centre Network for researches and shared publications.

Yunus will arrive in Bologna, the city where he received the honorary citizenship, at 12:30 pm for the inauguration of the new counter/office from Grameen Italia Foundation for microcredit and self-entrepreneurship at Piazza Verdi n.2.

The office will be hosted within the spaces of the Bologna University and it will represent a referral point for new entrepreneurial initiatives directed to young university students, citizens and new entrepreneurs.

At 12:45 pm Yunus will meet Unicredit to sign the partnership agreement between UniCredit and Grameen Italia at Palazzo Magnani in Via Zamboni, 20, to start a supporting program for microfirm through the microcredit tool. The agreement is part of the initiative Social Impact Banking, a program that represents the commitment of Unicredit in helping to develop a more equal and inclusive society, through identification, financing and promotion of activities that bear a positive social impact.

The day will end with a public lecture from prof. Yunus titled “The New Economics of Zero Poverty, Zero Unemployment, and Zero Net Carbon Emissions” at Bologna Business School in Villa Guastavillani from 03:00 to 04:30 pm.

Grameen Italia Foundation will wait for you in this important day that we hope it would happily continue the story which tied Yunus to Bologna in the last fourteen years. Indeed, the first meeting with the city occurred in 2004 two years before he received the Nobel prize, in occasion of the conferment to Yunus of the Honoris Causa Degree in Education Sciences at Alma Mater Studiorum with the Rector Pier Ugo Calzolari. In 2015, Yunus has received the honorary citizenship of the city of Bologna.