Story of a Nobel day with Professor Yunus

“Every time I see a problem, I invent a new business to solve it. I invent a business different from the conventional ones, where the focus is not about profit but where everything is dedicated to solving people’s problems.“

It is with these words that Prof. Yunus introduces the uniqueness of Social Business, turning to a packed classroom of students gathered at the Forlì Campus of the University of Bologna to attend his Lecture. It was April 18 and the “banker of the poor” was visiting Forlì and Bologna on the day dedicated to the theme of Social Business promoted by the Fondazione Grameen Italia in collaboration with the University of Bologna and Bologna Business School.

Prof. Yunus arrived in the city of Forlì in the morning for the inauguration of the first Yunus Social Business Centre of the University of Bologna. 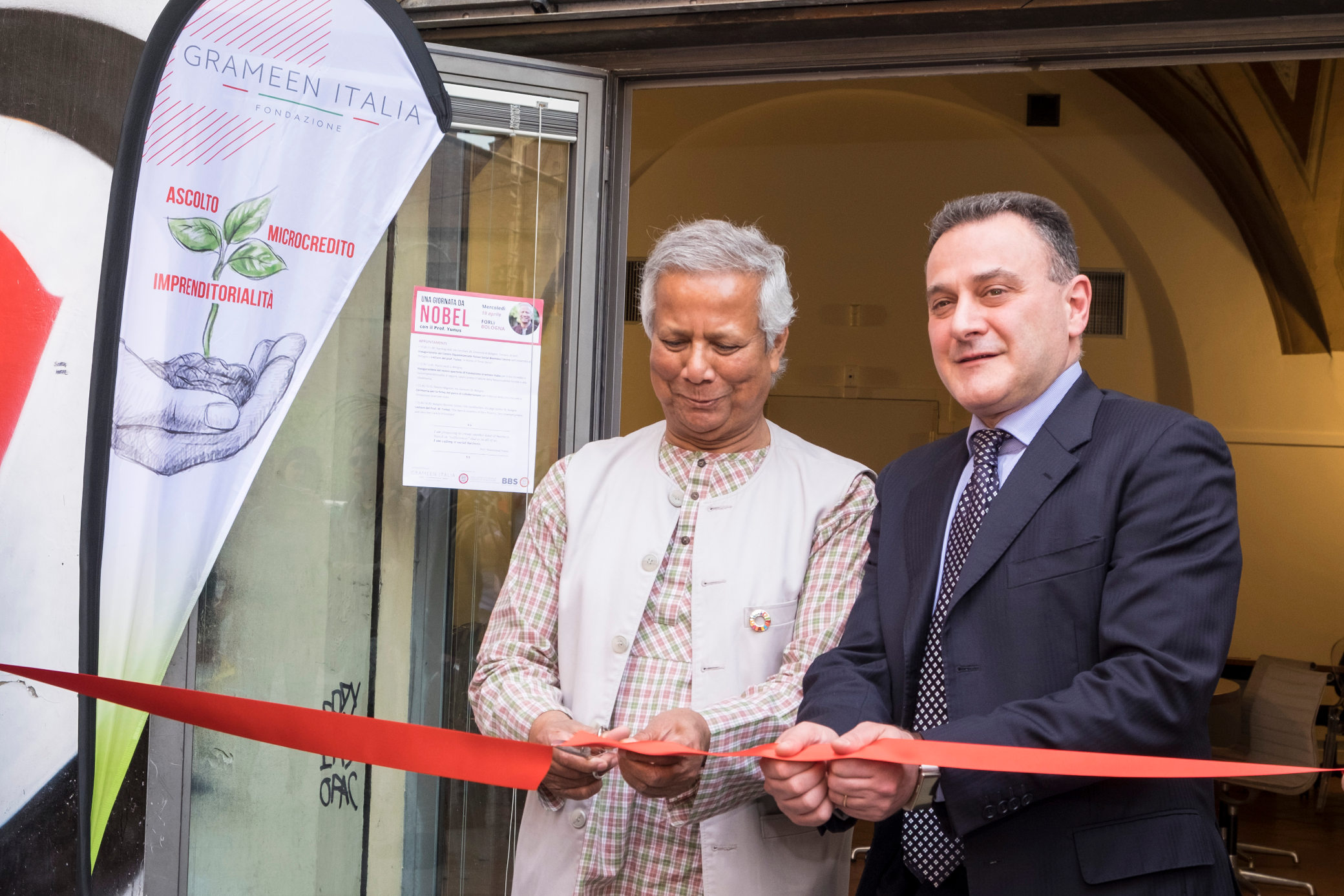 The ribbon-cutting ceremony was introduced by the words of the magnificent Rector Francesco Ubertini and the Director of the Department of Management Maurizio Sobrero, accompanied by the greetings of the Mayor of Forlì Davide Drei, in the presence of the Coordinator of the Master’s Degree Course in Management of the Social Economy Federica Bandini, of the Campus Director of Forlì Felix San Vicente Santiago and of our Vice President of the Grameen Italia Giuseppe Torluccio.

The activities of the Yunus Social Business Centre will concern the research on economic and business models with a social vocation, the publication, and dissemination of study results, and the collaboration with the international network of the Yunus Centres for joint research and publications. Not least, it will be an expression of the common will to make scientific disclosure on this issue.

For example, did you know that the famous Grameen Bank, the “bank of the poor”, is itself a Social Business?

In his speech to the students, to explain the differences with other forms of capitalist enterprise and the characteristic social vocation of the Social Business model, Yunus cited other cases of Social Business in the world, remembering how much work there is still to be done to raise awareness and to involve economic subjects and political decision-makers on the subject of business as a healthy carrier of social advantage.

In fact, the invitation that Yunus has been addressing for years to the various players in the economy, finance, and politics is to design a new economic system capable of providing truly inclusive and direct services to all sections of the population, without excluding the most disadvantaged.

As he recalled during the Lecture in Forlì, the current financial system has led to an unfair and unjust concentration of wealth in the hands of a handful of people: there is, therefore, the need to reform the economic system, also in light of the failure of the traditional capitalist system on the front of reducing social inequalities and environmental risks.

Yunus also underlined the urgent need to update training in the business-economic field, which is now stale of references to outdated models, promoting future entrepreneurs to reflect on business theories and practices capable of generating social benefit.

An urgency to which the Forlì educational center of the University of Bologna responds with a wide range of courses in social economy.

Finally, on the subject of job search, Yunus has so kindly provoked the young men and women present: “Why are you looking for a job? Who told you to get a job? Did your teachers ask you for a job? Do your books ask you for a job? (…) The idea of work has gone out of fashion!“. And on this statement, the audience broke into a short laugh.

“Work was invented in the last century but somehow it is a concept still in use. Try to tell yourself, every day, when you wake up in the morning: I’m not a “job seeker”, I’m a “job creator”. (…) Be independent, be free!“

Prof. Yunus then arrived in Bologna at 12.30 to greet with a brief speech the guests of the CSR and Social Innovation Exhibition, gathered in the Foyer of the Teatro Comunale, and to inaugurate the new counter for microcredit and self-entrepreneurship of the Fondazione Grameen Italia in Piazza Verdi 2.

Hosted in the spaces of the University of Bologna, the help desk is intended as a place to listen to the business ideas of young people, both students and non-students, to carry out business start-up activities.

At the end of the rich morning, Yunus met Unicredit at the prestigious Palazzo Magnani in Via Zamboni 20 to seal the collaboration agreement between the bank and the Fondazione Grameen Italia for the launch of a program to support micro-enterprises through the microcredit tool . The agreement is part of the Social Impact Banking initiative, a program that represents Unicredit’s commitment to contribute to the development of a more equitable and inclusive society, through the identification, financing, and promotion of initiatives that have a positive social impact.

Our “Nobel Day” ended with a second lecture by Prof. Yunus entitled “The New Economics of Zero Poverty, Zero Unemployment, and Zero Net Carbon Emission“, moderated by our Vice President Prof. Giuseppe Torluccio and held at the Bologna Business School.

Once again, talking about microcredit, Yunus explained and motivated the social aims of Social Business.

More than thirty-five years have passed since his first loan of 27 US dollars granted to produce bamboo furniture to a group of women from the village of Jobra (Bangladesh). Since then, the microcredit system has spread to reach over 100 countries in the world, serving more than 9 million clients. An innovation, that of microcredit, which has been able to overcome the boundaries of the rural areas in which it was born and to become part of the instruments of microfinance and social finance, in Europe and Italy.

“I want you to keep in mind that if you continue to follow the same old rules, you will always go to the same destinations,” concluded Prof. Yunus “If instead you want to reach new destinations, you must establish new rules that will be in complete opposition to the old ones.“ 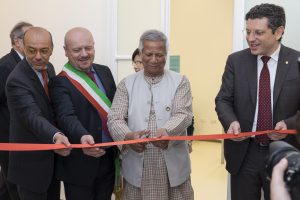 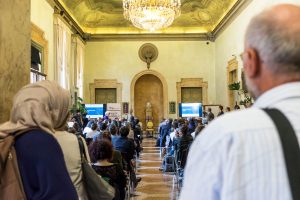 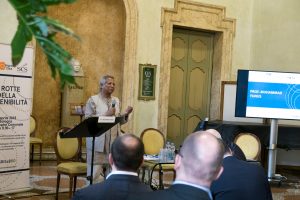 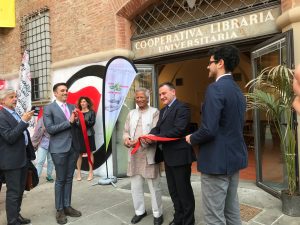 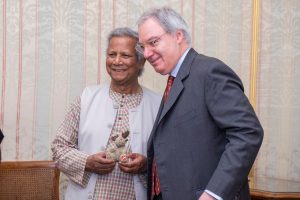 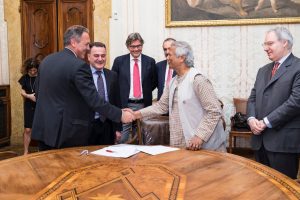 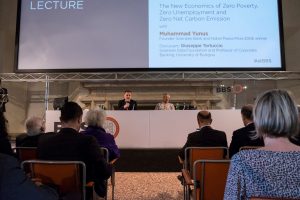